COMING TO A COMMUNITY NEAR YOU SOON - CA-POWYS!! 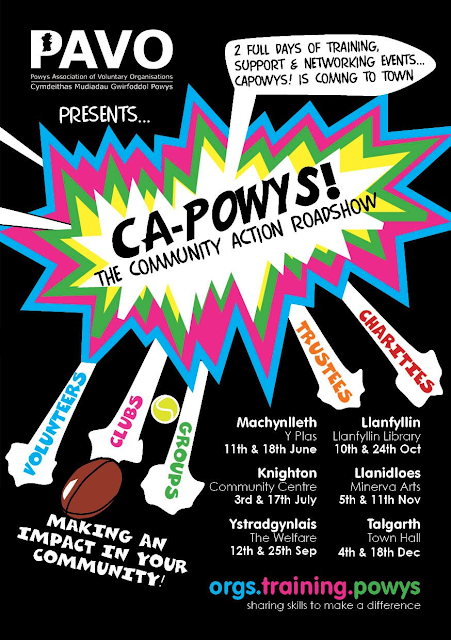 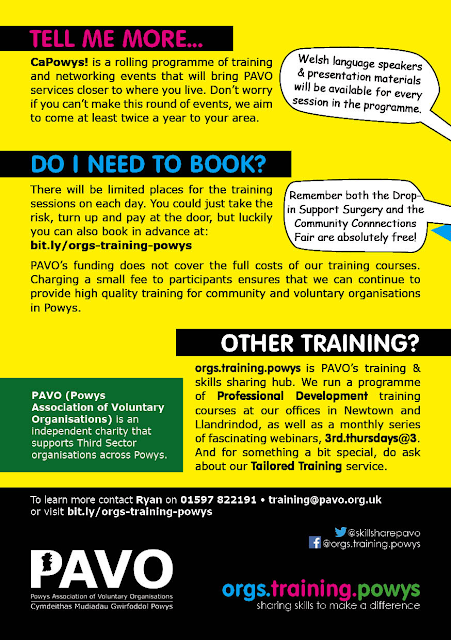 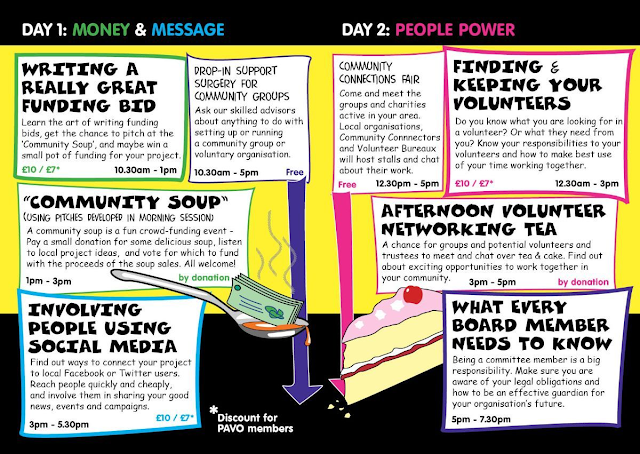 ACCESS SPORT PLAYING FIELDS GRANTS - Grants up to £5,000 for UK projects that will increase opportunities for young people in disadvantaged areas of the UK to play outdoor sport.

Access Sport’s Playing Fields Grants (also known as the Angus Irvine Playing Field Fund) aims to provide grants to support local community groups, sports clubs and charities across the UK with projects that will increase opportunities for young people in disadvantaged areas to play outdoor sport.
Local community groups, charities and sport clubs may apply for a grant of between £2,500 and £5,000. Applications in which an Access Sport grant will encourage other funders to make a donation are particularly encouraged.
Applications can be made for grants towards some or all of the following types of projects with the intention of growing outdoor sports capacity to reach more young people (please note this is not an exclusive list):
o The development and improvement of playing fields and other facilities;o The development and training of volunteers including the provision of qualifications;o The purchase of specialist disability equipment; and/oro The development of long-term sustainability, for example marketing and finance expertise.
The application deadline is Wednesday 31 July 2019.
An application form, which should be submitted by email, can be downloaded from the Access Sport website.  Further useful background information about the work of Access Sport can be found in its annual report.
Contact details for the Fund are:
The Angus Irvine Playing Fields FundAccess Sport3 Durham YardTeesdale StreetLondonE2 6QFTel: 020 7993 9883Email: AIPFF@accesssport.co.uk
(Source: GRIN)
Posted by Claire S PAVO at 01:08 No comments:

The Canoe Foundation provides grants to clubs and community organisations in the UK for the following:

o New or improved launching points in urban or rural locations or as part of a water trail, such as steps or pontoons. Linked promotion of access points including signage or maps to increase participation and use;o Incorporating better accessibility or facilities at waterside locations which might improve the parking or changing aspects of a site; and/oro Improving the quality of the waterways and oceans through support, for example practical kits, for a clean-up or an improved natural habitat.
The Foundation’s current funding priority is on smaller tactical level projects. These can be new facilities or repairs to existing installations that have deteriorated over time or by an “act of god”. There is also an emphasis on enabling enhanced participation in paddle sports for all people.
Grants of between £2,000 and £20,000 are available, with applications towards the lower grant level more likely to be successful. Larger awards are occasionally made, although these are subject to a greater level of scrutiny
While the Foundation will fund 100% of the total project cost, match funding or community/club contribution is recommended.
The Foundation considers applications every three months. The next deadline is Saturday 31 August 2019.
Further information, together with an online application form, is available from the Canoe Foundation's website.

Have you got a project idea which will enhance the environment in your community?
We are pleased to announce that the first round of 2019-20 Landfill Disposals Tax Communities Scheme (LDTCS) is now open for applications.
The fund is open to applicants carrying out activity within 5miles of an eligible landfill or waste transfer site – view the map here to check if you’re eligible to apply. From this page you can also view the scheme’s other webpages for further information and the scheme guidance.
The scheme funds projects with focusses on Biodiversity, Waste Minimisation and the reduction of Waste to Landfill and Wider Environmental Enhancements.
We’ve run two rounds of the fund so far and have funded some great projects making positive environmental enhancements in their locality with the support of the community. From pine martens to reuse of discarded plastics, there is a variety of activity happening across Wales.
You can read more about the projects already running in Wales from here.
There is a 12-week application window, the closing date is 21 July 2019 (23:59).
We receive a high number of applications which makes the funding process very competitive. If you would like support and guidance in the development of a project you can contact your local Third Sector Support Wales CVC here.
If you have any questions about LDTCS please get in touch with the WCVA Grant Funds Team at ldtgrants@wcva.org.uk

Application deadline: Friday 28 June 2019 at 12 noon for stage 1 applications (stage 2 application deadline: Friday 13 September 2019 at 12 noon).
Funder: Comic Relief (founded 1984. Charity number: 326568. Total value of grants awarded during the year ending 31 July 2017: £74.4 million).
Not to be confused with Comic Relief’s new “Ahead of the Game: Sport and Mental Health” featured in last Wednesday’s GRIN bulletin, ‘Bridging the Gaps: Strengthening Mental Health Support for Children and Young People” is seeking proposals from organisations providing mental health support to vulnerable and underserved children and young people at an early stage so that they are aware of their mental health and can build resilience as they grow and develop.  Grants are available for initiatives in the United Kingdom working with children and young people aged 5-24, and Bangladesh, India, Kenya, Nigeria, or Zambia for projects working with children and young people aged 5-30.
Proposals should be working on two or more of the following areas:
o Tackling stigma and discrimination;o Increasing access to quality service provision; and/oro Strategic / systemic changes at local and/or national level.
The funding is for proposals that are particularly focusing on vulnerable children and young people from groups underserved by current services.
Comic Relief defines under-served groups as a group that is (or can) be marginalised and unable to access mental health services. This is not a definitive list but some examples of the groups Comic Relief is seeking to support can include:
o Socio-economically disadvantaged people of any ethnicity;o Marginalised ethnic groups (in the UK referred to as Black, Asian and Minority Ethnic (BAME));o Children and young people who have a parent with mental health problems;o Lesbian, gay, bisexual, transgender, or questioning (LGBTQ+);o Children and young people living with HIV or other long term and life limiting illnesses;o Children and young people with disabilities, including learning disabilities;o Refugees and asylum-seeking children and young people;o Children and young people affected by traumatic experiences such as violence, abuse and neglect; and/oro Young offenders and young people who are not in education, employment or training.
Grants of between £150,000 and £700,000 are available for between 3 and 5 years.
Applications will be considered from a range of organisations working on mental health including:
o Community based organisations;o User-led organisations. They should consider working in partnership with others to submit a bid, as Comic Relief will be prioritising applications from these user-led groups;o Faith-based organisations; ando Non-governmental organisations working on issues like education, HIV/AIDS, in health settings and in the criminal justice system.
Where appropriate, schools, universities, criminal justice services, local authorities and other local service providers should be included and involved in the work.
Applications will be considered from organisations with a maximum annual income of £10 million, and a minimum annual income of £250,000 in the UK or £75,000 in other countries, as shown in the last annual accounts submitted to the relevant authority.
Funding can be used to cover specific project activities, or a combination of activities and organisational core costs or overheads. Organisations can include full cost recovery.
Both existing work and piloting new approaches and partnerships will be considered.
The application process has two stages, as follows:
o Stage 1: the deadline for stage 1 applications is 12 noon on Friday 28 June 2019.o Stage 2: the deadline for second stage applications is 12 noon on Friday 13 September 2019.
Successful applications are expected to be announced by Friday 31 January 2020.
Further information about the programme, together with details about how to apply can be found on theComic Relief website.
Contact details for Comic Relief are:
The Grants TeamComic Relief89 Albert EmbankmentLondonSE1 7TPTel: 020 7820 2000Email: grantsinfo@comicrelief.com
(Source: GRIN)
Posted by Claire S PAVO at 01:24 No comments:

The Co-op Foundation launches a new £1 million fund for community groups in Wales today (1 May).
The fund is aimed at helping those with a community and environmental focus to safeguard spaces and become more sustainable, and has been generated by proceeds from the 5p single-use carrier bag charge in Co-op’s Welsh food stores.
https://fundraising.co.uk/2019/05/01/co-op-foundation-announces-1m-fund-for-welsh-community-groups/ 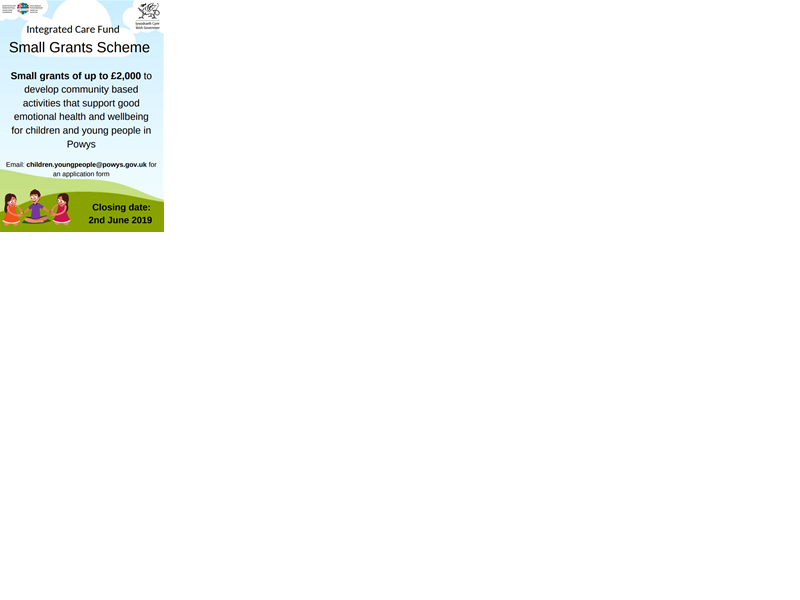 This blog is for all Voluntary and Community Groups in Powys. We aim to keep you up to date with funding information, and also want you to share your experiences and successes with us.

For a wealth of information on issues for voluntary and community groups, go to www.pavo.org.uk